Cover Reveal: CAPTAIN GREEN AND THE TREE MACHINE (plus a giveaway)

Thank you, Tara, for hosting the cover reveal for CAPTAIN GREEN AND THE TREE MACHINE!

READY TO ZOOM OFF ON A SPECIAL SUPERHERO MISSION?

Captain Green is back and this time he’s creating a gadget to help save the planet. As he fine-tunes his invention, disaster strikes. Hornbill’s tree has been chopped down and there’s tree trouble for Elephant and Orangutan, too. Captain Green scrambles to finish his invention—a TREE MACHINE—and speeds to the rescue! ZAP! ZOOP! ZINK! Trees pop up all around until…BANG! Oh no! How will Captain Green save the animals now?

This is the second story in a series, following on from Captain Green’s adventures in CAPTAIN GREEN AND THE PLASTIC SCENE. Both books are illustrated by the phenomenal Danny Deeptown and published by Marshall Cavendish.

CAPTAIN GREEN AND THE TREE MACHINE releases on Earth Day 2021 (April 22nd), but the cover is here today! 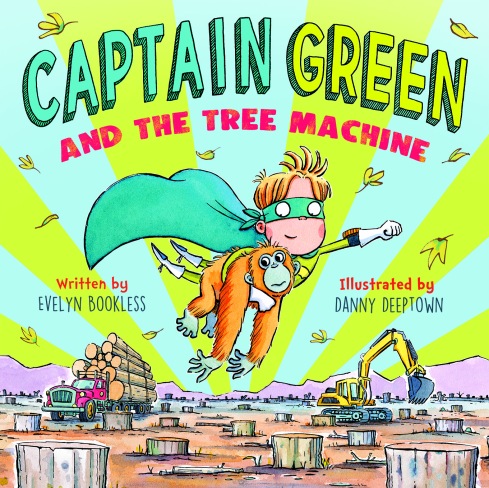 Evelyn and Danny asked one another tree—I mean three—questions about creating the book.

Evelyn: As you know Danny, I adore the cover for CAPTAIN GREEN AND THE TREE MACHINE. What were your main goals when creating it?

I wanted it to look fun and vibrant whilst revealing a side to the terrible truth about deforestation. Not easy combining the two, but I feel the uplifting expression of Captain Green is reassuring and will encourage children to look beyond the cover. It was also important to keep certain elements of the first cover as this book is the second in the series, e.g. with the title, background beams and a similar composition overall.

Danny: What surprised you with the end result?

I am always blown away by your work and am usually left in a bit of an emotional state upon seeing it for the first time, but once I mopped up my happy tears, I surprised at how well you told the essence of the story in only one image. We don’t see the tree machine on the cover, it’s left as a surprise for the reader because Captain Green still has to finish inventing it. We do see Captain Green working his little socks (and boots) off saving a desperate Orangutan, and the loggers leaving a path of destruction. I am delighted that the cover has tons of kid appeal, despite it portraying a very real scenario in our world today (sadly minus the superhero part!).

Evelyn: Did you sketch out different possibilities for the cover or had you a clear idea in your mind from the start?

I had the idea from the start, but it took a few sketches until I was happy. For me it was vital the Orangutan featured on the cover, as it’s sadly the one animal people most relate with deforestation.

Danny: What was your favorite part of the writing process for this story?

I enjoyed playing with superhero vocabulary and sounds to make Captain Green’s world come to life for readers and make the read-aloud experience as fun as possible. Even though this story is based on the real issue of deforestation, the story of Captain Green’s efforts to create a gadget to assist in his earth protecting endeavors, was where I had most fun as a writer. 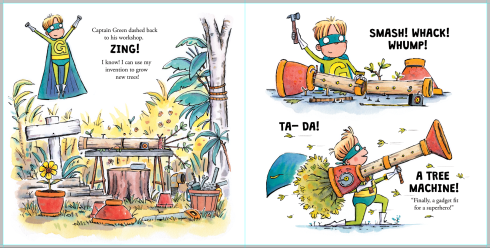 Evelyn: How did the illustrations for the first story affect the design for this book?

In regards to drawing Captain Green, it was easier as I had drawn him a thousand times before, therefore I didn’t have to worry about character design for this book. However, I wanted to improve him and the illustrations overall. There are a few illustrations that are purposely similar in layout to some in the first book. However, with a lot of spreads I had to be braver in terms of setting a scene of deforestation. To achieve this, I had to pan out so I could show as much deserted landscape as possible to get the message across. These are some of my favorite illustrations in the book. 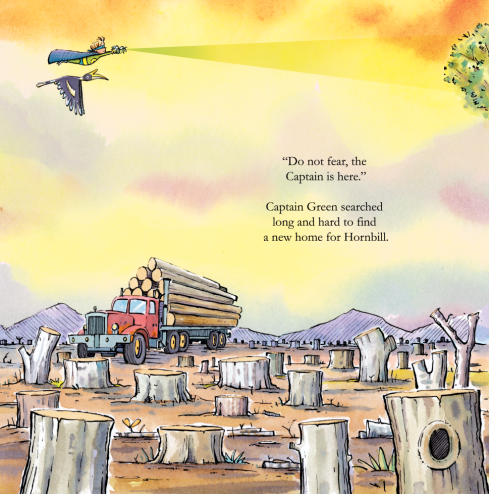 Danny: What made you decide on deforestation as the theme for Captain Green’s second adventure?

In in my travels throughout South East Asia (where the story is set), I saw huge areas of land that had been stripped of ancient rainforest for timber and to make way for agriculture and expanding populations. We know that a loss of trees leads to a rise carbon dioxide levels, soil erosion as well as the destruction of forest habitat and the loss of biological diversity of both plants and animals. As with CAPTAIN GREEN AND THE PLASTIC SCENE, I wanted to shine a light on an important issue in a way that is fun and engaging for children. I added some back matter that includes ways for young superhumans to help. 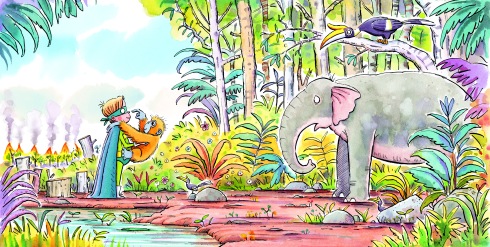 Set EARTH DAY off with a bang by pre-ordering a copy of CAPTAIN GREEN AND THE TREE MACHINE online today or through your local independent book store.

Evelyn and Danny will give away one copy of CAPTAIN GREEN AND THE TREE MACHINE to a lucky commenter (to be sent your way when it releases in April 2021)!

A random winner will be selected next month.

Evelyn Bookless grew up on a farm in the west of Ireland where she loved to make forts and play in the trees with her siblings. She is a nature lover, mum, teacher and writer. Evelyn spent ten wonderful years living in Asia but was saddened to see beautiful rainforests cut down during her travels around the region. She recently moved to the Netherlands, where she enjoys cycling her blue bike, Betty. Evelyn and Danny’s debut picture book, CAPTAIN GREEN AND THE PLASTIC SCENE, won a Northern Lights Book Award for Children’s Environmental Fiction. Visit her online at evelynbookless.com, on Instagram @evelynbookless and on Twitter @evelynbookless.

Being obsessed with wildlife from a young age, Danny Deeptown found his love of drawing through hours of copying scientific illustrations from books of animals and dinosaurs. His artistic talent later led him to study Illustration in South Wales, UK. It was here he found a love for classic book illustration and the use of pen and ink. Today, Danny creates art for children and adults alike. He has illustrated numerous books that mostly involve characterised animals. When not in his studio, Danny likes to spend his time adventuring and seeking out new places in nature that are relatively remote. He is happiest in a secret place surrounded by trees with passing water. Visit Danny online at dannydeeptown.com, on Instagram @dannydeeptown and on Twitter @dannydeeptown.