Josh Funk Shares the Short & Sweet Trick to Creating Anthropomorphic Picture Book Characters (Even Though the Title of This Post Is Far from Short & Sweet)…PLUS a Giveaway!

Josh: Hiya, Tara! Thanks for having me back to talk about SHORT & SWEET, the fourth book in the Lady Pancake & Sir French Toast series. 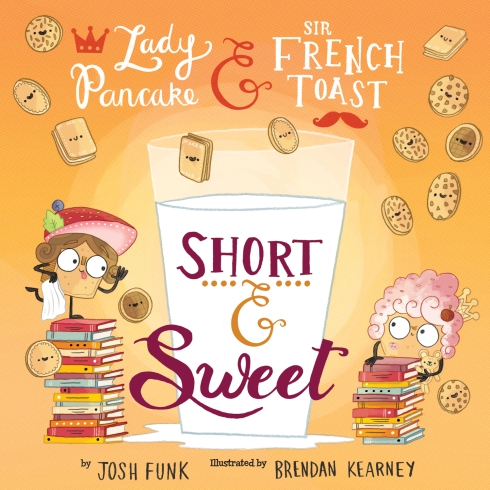 Tara: So what’s the trick? How do you do it?

Josh: I don’t really think there is a trick.

Tara: Wow, this is gonna be a stellar post. [eyeroll]

Josh: Okay, okay. I think that maybe the trick is that there is no trick.

Tara: You already said that. You gotta do better.

Josh: I mean that there’s really nothing special about making a character who’s not a human have humanlike qualities. You just treat them as you would any human.

Tara: Aha. Like the Human League? You know I dig 80’s music.

Josh: Well, think about any book featuring animals. Take one of my all-time favorites, BOATS FOR PAPA by Jessixa Bagley. The book is about a boy and his mother. It doesn’t matter that they’re beavers. They have the same connection a human child and parent would have. The emotions are all there. We, the readers, can immediately associate with Buckley, a boy who misses his father, and his Mama.

Tara: Okay, but animals are already pretty close to humans–they have eyes, nose, mouth, can move around… What about something that isn’t actually alive in the real world?

Josh: Like Patience and Fortitude in my book LOST IN THE LIBRARY illustrated by Stevie Lews about the lion statues that guard the steps of the New York Public Library?

Tara: Hmmm, I don’t know. They’re statues, but they’re statues of lions. And lions are animals. I don’t think that counts. BTW, great job sneaking in the title of another one of your books. [second eyeroll]

Josh: Thanks. The sequel, WHERE IS OUR LIBRARY? comes out on October 27th.

Tara: Geesh, I thought you were here to talk about SHORT & SWEET.

Tara: So let’s cut to the chase—how do you write anthropomorphic food characters? They’re not humanlike. They don’t have parents or built-in emotions. How does that work? What’s the trick?

Josh: It’s really the same answer. There is no trick. I just treat them as if they’re people in their specific setting. It’s really not all that different from Private I in another one of my favorite picture books, 7 ATE 9 written by Tara Lazar and illustrated by Ross MacDonald.

Josh: Or do I like the sequel, THE UPPER CASE: TROUBLE IN CAPITAL CITY better? It’s so hard to decide. 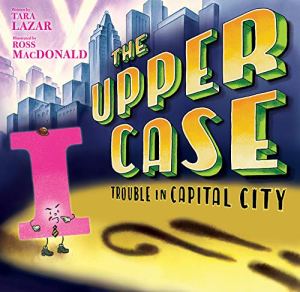 Josh: Who knows, maybe I’ll enjoy book #3 the most when it comes out next—

Josh: Got it. But think of Private I. Private I is a detective in a well-defined world where all of the inhabitants are letters or numbers or punctuation and so forth. Do we know much about Private I other than the fact that he’s a private eye and he’s got a thing for B (and hard-boiled puns)? Not really. We know he loves to solve mysteries. He loves  to discover the truth and save the day. But those are qualities common to most detective main characters. And that’s about all we know.

The charm of those books isn’t the fully fleshed out characters. It’s the world. It’s the mystery. It’s the cleverness, humor, quirkiness, and puns that we love.

Tara: I guess that makes some sense. That Tara lady is a pretty good writer.

Josh: Exactly. And, I treat Lady Pancake and Sir French Toast as I’d treat any other creature thrown into the world that they’re in: a fridge. They have wants and needs, emotions and feelings and on the first spread, I throw in the conflict.

There are only a limited number of things that can happen to characters in a fridge. They could be nearly out of syrup, resulting in an argument and race between two friends (see book #1:  Lady Pancake &  Sir French Toast). 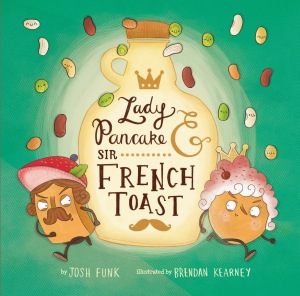 There could be a terrible smell threatening to destroy the fridge, causing them to solve the mystery behind the stinky stench (see book #2: The Case of the Stinky Stench). 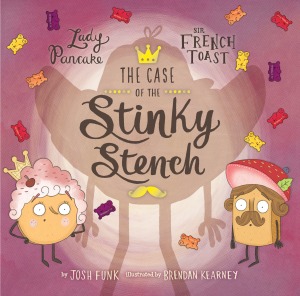 The fridge could start to freeze over, forcing them to team up with their nemesis, Baron von Waffle, to save the world from the next ice age (see book #3: Mission Defrostable).

But really, the two main characters are just generic hosts who experience these bad things happening. There’s not too much to them.

I think the charm is the setting and the adventure. The rhyme and the silliness. The hilarious illustrations from Brendan Kearney. But the truth is, after four books, we don’t really know all that much about the characters of Lady Pancake or Sir French Toast.

Tara: So to sum it up, the trick is there’s no trick. You treat the anthropomorphic characters as if they’re just like you and me, experiencing things in their own world, their own special setting.

Josh: I couldn’t have said it better myself. It’s almost like I’m writing your half of the blog post dialogue in addition to mine.* **

Tara: So tell me about this new, fourth book in the Lady Pancake & Sir French Toast series.

Josh: I try to change up the genre in each of the books. Book #1 was a race. Book #2 was a mystery. Book #3 was an action/adventure (inspired by Indiana Jones and the Last Crusade and James Bond, despite the title being a riff off Mission Impossible).

For Short & Sweet, I originally intended it to be a sci-fi/comedy (like The Absent-Minded Professor or Honey, I Shrunk the Kids), but it might be more like a magical-body-swap story (like Freaky Friday or Big).

After 3 literary adventures and over 5 years in the fridge, Lady Pancake and Sir French Toast are, regrettably, beginning to go stale. But have no fear! Professor Biscotti has a DE-spoiling ray that can help. Unfortunately it malfunctions and turns our titular characters back into tiny (adorable) toddlers who run amuck in the fridge causing culinary chaos once again. With a little STEM expertise and some maple syrup, it all works out in the end (spoiler alert – should I have said that before I told you it worked out? Probably. Oops).

Tara: Sounds delicious. And that’s the real problem with food books. I get so hungry reading them that I put the book down and get something to eat.

Josh: On that note, why don’t we end this interview and go grab some brunch.

Josh: Sounds good. But how will we pass the salt?

* Josh actually did.
** But Tara changed some stuff. Except for the “blah blah blah” part. I kept that.

Josh Funk is a software engineer and the author of books like the Lady Pancake & Sir French Toast series, the ​It’s Not a Fairy Tale series, the How to Code with Pearl and Pascal series, the A Story of Patience & Fortitude series, Dear Dragon, Pirasaurs!, Albie Newton, and more. For more information about Josh Funk, visit him at joshfunkbooks.com and on Twitter, Instagram, and Facebook at @joshfunkbooks.