While we all hunker down at home and sometimes complain these days, really, it is our most treasured space. Be it ever so humble, there’s no place like home.

Jane Smith’s new book HELLO, NEW HOUSE seeks to inspire calm and comfort with what can be a major upheaval in a young person’s life—or really, anyone’s life—moving. 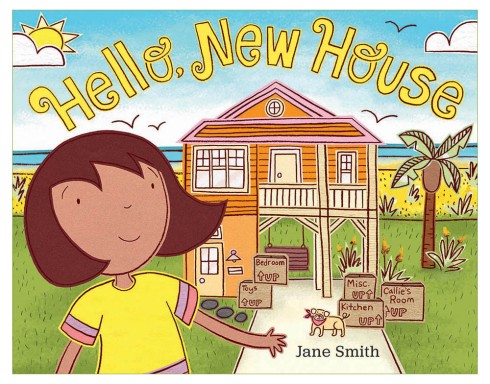 Jane, how did you get the idea for the book?

HELLO NEW HOUSE is inspired by my real-life, coast-to-coast move with my husband & young daughter from Hermosa Beach, California in the Southbay of Los Angeles to Wilmington, North Carolina. From the beginning, the move was a study in compare and contrast. We wanted to stay by an ocean in a warm climate, but we also wanted to settle down somewhere smaller, quieter, slower. For all that stayed the same, a lot was different; weather (hurricanes!), landscape, plant life, houses and more. I wrote HELLO NEW HOUSE as a kinda of meditation for those moments when settling into our new home was more challenging than fun. And I knew it would be comforting for others, too. Especially kids.

Your spare language is so soothing. Was that a deliberate choice to keep the language simple?

Thank you! Yes, it was a deliberate choice. I wanted the text to have a gentle flow that was easy to read, easy to connect with and very direct in its meaning.

And the simplest things can be the most difficult! Did the story go through major revisions?

The only major revision along the way was a shift in the original ending that my editor, Andrea Hall, very smartly requested. Initially, the ending focused more on the new friend and that human connection to the new place, but Andrea saw right away that we needed to make one more leap from there, brining the story back full-circle to Callie’s family, which of course, is the most important thing that remains the same.

(All that said, though, the final manuscript was still the 11th draft!)

11th draft? Wow. What kind of changes did you make along the way and over what period of time? You’re also the illustrator, so when did you decide it was ready for the dummy stage?

Mostly, tweaks of language—creating better flow, pacing and musicality. I wrote the first draft of the manuscript early in 2017. It came fully formed for the most part, but I didn’t start creating the thumbnail dummy til late in 2018—over a year later. I was a bit in my head about the artwork as I wasn’t sure my style could capture the story. Drawing people and landscapes felt a bit intimidating. I initially felt that the story would be better served if someone else illustrated it! And since I always have multiple projects in the works at any given time, it was easy to put it aside for a good long while.

But then I turned 40 and was wondering if I’d ever sell another book and that lit a fire under me. I made it a goal to get a fully fleshed out dummy to my agent, Nicole Tugeau, that year, so we could begin the submission process. I found my way back into the story visually by playing in my sketchbook with character drawings as well as drawing houses specific to each region in the story. This process allowed me to ease into creating the thumbnail dummy. And by December 2018 the thumbnail dummy book was complete and Nicole had the project out to publishers by Christmas. We sold the project to Albert Whitman the following summer in 2019. 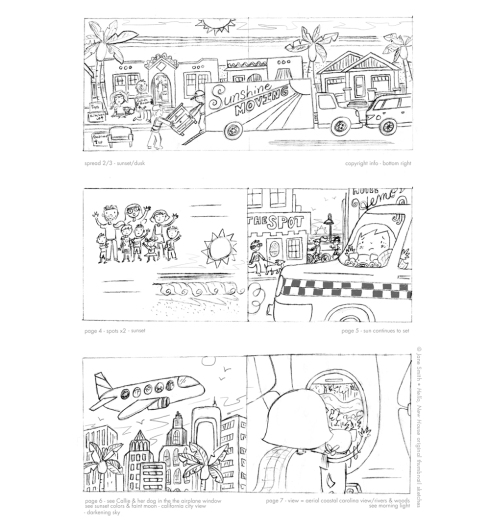 What do you hope children will take away from the story?

My hope is that HELLO NEW HOUSE will help kids identify and connect with the consistent touchstones in their lives (like comfort objects, pets, friends & family) in a way that helps them navigate big change. Like a big move! And that in doing so, they are also better able to embrace the adventure of big change. New places. New friends. New experiences.

Yes! Change can be scary…but change is also exciting!

I’m excited for your book which releases from Albert Whitman on October 1.

Blog readers, you can win your own copy!

A random winner will be chosen next month. 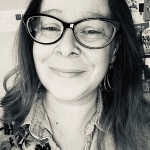 Jane Smith is the author-illustrator of the 6-book CHLOE ZOE picture book series, published by Albert Whitman & Co. Her forthcoming picture books, HELLO NEW HOUSE (Albert Whitman & Co.) and MISS MEOW (West Margin Press) will release in fall 2020 and fall 2021 respectively. Jane earned her BFA in Illustration at the Columbus College of Art & Design before beginning her career in publishing as an art director of children’s novelty books. She currently creates artwork for a variety of publishing and art licensing clients in her Wilmington, North Carolina studio. Visit her online at superjane.com, Instagram @superjanesmith and Twitter @SuperJaneArtist.