Laurie Keller’s Cooked Up More Doughnuts in HELLO, ARNIE! (plus a giveaway)

Boston Cream used to be my favorite doughnut until ARNIE rolled around. The original ARNIE picture book released the year my daughter was born and it was an instant hit in our house! I couldn’t get enough of the Ringy-Dingy-Doughnut-Making-Thingy

, Arnie’s owner Mr. Bing, and the humorous pastry asides sprinkled thru the story like so many…erm…sprinkles.

Hello, Laurie! This is Arnie’s 5th book! When you wrote the first book, did you realize that you had a character worthy of multiple stories and genres?

No, I never thought about doing another book about Arnie. But when I decided to try my hand at writing a chapter book, my editor suggested writing one about Arnie. I wasn’t sure that could work—I figured his story had been told now that he was happily settled in as Mr. Bing’s doughnut-dog—but once I started playing around with it, I saw he was ready for some more adventures! And his latest story, HELLO, ARNIE! is more of a prequel to the original book for younger audiences.

I’m so glad you decided to write the chapter books about Arnie… Because we also got Peezo the pizza slice!

Why do you think Arnie is such a successful character?

Yes, Peezo! He evolved as I started writing the chapter books. I didn’t have a plan for a new BFF for Arnie but I’m glad he appeared—he has a wacky pizza-nality!

I’m not totally sure why kids like Arnie but perhaps because he’s very child-like himself. He has a natural exuberance for life but experiences ups and downs like we all do. And maybe just because he’s a DOUGHNUT! Who doesn’t like a good doughnut?

Of course, everyone LOVES doughnuts. They might love them so much, they want to BE a doughnut! I understand for the release of the book, you’ve re-imagined some children’s book creators in delicious, deep-fried forms. Care to share?

Absolutely! I was going to make about 20 “donut portraits” of some author/illustrator friends and a few teachers and librarians just for fun to celebrate the release of HELLO, ARNIE! but I got on a “roll” and ended up with over 40 (yours included, Tara Eclair)!

I am HONORED! And stuffed with cream! (The flower between my teeth is a nice touch.)

Here are the others! See if you can guess their authorly identity! 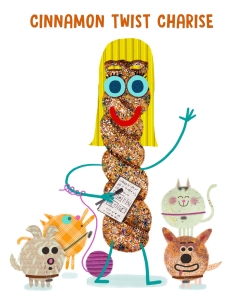 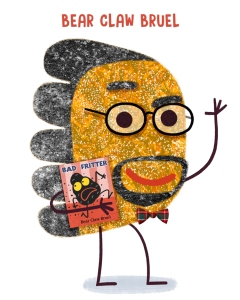 Do you think you’ll create any more ARNIE books?

We would all love that!

HELLO, ARNIE is a little different from the style of the original ARNIE book. Could you explain how and why you made the change?

Yes, it’s quite a bit simpler! The original Arnie story has quite a bit of text and also many asides (they’re not an integral part of the story, they’re just added jokes and banter). So many times over the years librarians and parents have told me that they love Arnie’s story but that it takes a long time to read since kids will never let them skip any of the asides! That’s kind of a fun problem really, but it can be difficult when it’s being read aloud for story-time or bed-time and and time is limited. So when I got the idea of making a “pre-quel” I decided to address that problem and make it a simpler/quicker read. As a result that skewed it to a slightly younger audience which I kind of liked since most of my books are in the 4-8-ish age bracket. That being said, I still tried to keep the humor in line with Arnie’s other books with the hopes that it would still appeal to a broad range of  readers.

And I can attest that ARNIE is the same goofy guy with dozens of pastry friends, including one very special addition. It’s a mega meta delight and I’m certain that audiences will eat it up! (The book! NOT ARNIE HIMSELF!)

Thanks, Laurie, for sharing this adorable new ARNIE with me and Tara Eclair.

If you are, too, blog readers, leave one comment below.

A random winner will receive a copy of HELLO, ARNIE!

The winner will be chosen at the end of the month. Good luck!