LOVE CAN COME IN MANY WAYS, and so can Novelty Books (plus a giveaway)

I have always loved novelty books—they are proof that big things come in small packages! With their brief yet powerful words, adorable pictures, and clever format, they are the book equivalent of a “fun size” candy bar. I’ve even tried to write a couple, but who knows if they’ll ever be published? I’m no Salina Yoon!

Today, author Terry Pierce tells us about her newest novelty book, illustrated by Suzy Ultman, and how it came to be.

Terry, I’ve often heard it’s extremely difficult to get a novelty book deal if you’re an author-only (and not an author-illustrator). Please tell us now that’s bunkum!

Oh, Tara, I wish I could tell you that’s bunkum, but I honestly have to say that LOVE CAN COME IN MANY WAYS (as a novelty book) was an extremely happy accident. It began as a picture book, strangely, born out of politics. After the 2016 national election, I was so saddened at the civil discourse in our country. People just weren’t being nice, in my opinion, so I found myself wanting to write about something up-lifting. Perhaps to lift my own spirits, but I wanted to create a book that would make children feel better about the world.

I decided to write a picture book about love, but wanted to make it super kid-friendly, so I used animals as the focus. For weeks, I poured over images of animals showing affection, which certainly filled my heart (and time—oh boy, what a rabbit hole it is to seek adorable animal photos online!). When I saw a photo of a mother and baby giraffe looking at each other, I had my opening line:

Nose to nose or gaze to gaze,
Love can come in many ways. 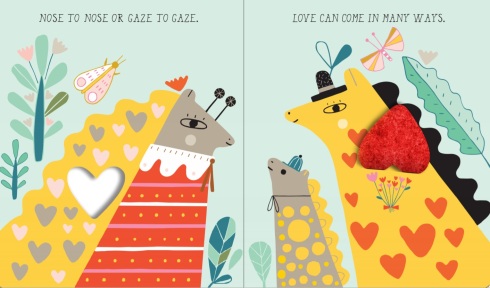 I worked on the manuscript (writing-revising-incorporating feedback from my critique group) for about three months. During that time, I realized it leaned more toward being a board book due to the sparse text and simple concept. When it was ready, I sent it to my agent, hoping she would love it as much as I did.

She held it for a few weeks before submitting it to a round of editors. Lucky for us, Chronicle Books expressed interest five days later. And it was my brilliant editor Ariel Richardson who envisioned it as a novelty book! Of course, I was thrilled! I’d always wanted to publish a novelty book, but as you wisely noted, it’s not easy for an author-only to sell one (I came close once, but ultimately it was a pass).

So was it your editor’s idea to do the felt flaps, uncovering the sweet surprises? How did that concept come together?

The initial idea was to publish it as a novelty book with various moving parts (flaps, tabs, etc.) but soon into the process, Ariel let me know they wanted to use felt flaps exclusively. She was excited about some gorgeous felt samples they’d found that were both beautifully colored and durable (to withstand the tugs and manipulations of small hands). When she emailed me the sample color palettes, I absolutely agreed!

Once we knew it would be a lift-a-flap book, it was then time for the amazing Suzy Ultman to start the rough sketches, which included possible flap placement. Suzy is such a talent for drawing “all things tiny” as I like to say, and she did a great job of incorporating the text into those sweet surprises under the flaps. 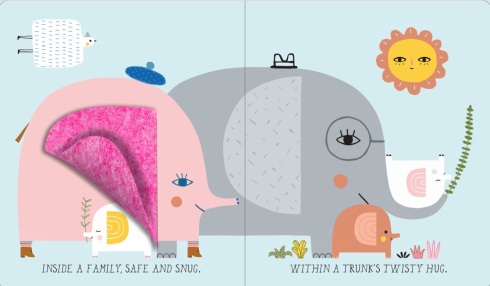 Did this concept change any of your text? Were animals brought in or moved out to make optimal use of the flaps?

We did make some slight changes to the text but not to adapt to the flap concept. Suzy was so creative in how she implemented the flap idea—some flaps were body parts (an elephant’s ear, a swan’s wing), others were part of their design (a heart-spotted giraffe has a felt heart that lifts, for example) that I didn’t need to change the text and one even became a leaf.

Where we did make some minor changes were to the types of animals. I wrote the line, “Enclosed in tender, toothy jaws” based on a photo of an alligator carrying her baby in her mouth. It was SO cool! But no matter how Suzy drew it, it looked like the mom was eating her baby! Yikes! We discussed other animals and decided pandas would work better since they have kid-appeal and do in fact, carry their babies in their mouths.

One of my favorite flap ideas was with the final page. Originally, we were going to have speech bubble flaps, but it didn’t quite work out spatially because we really wanted to show a diverse cast of humans on the final spread. We opted for one speech bubble flap instead. Ariel had asked me to think of possible phrases and the first one that came to mind was how I always sign my first board book (Mama Loves You So), “You are loved!” The team agreed it was a great message to end the reading/snuggling/bonding experience, and with the neon pink flap over it, well, it’s perfect! 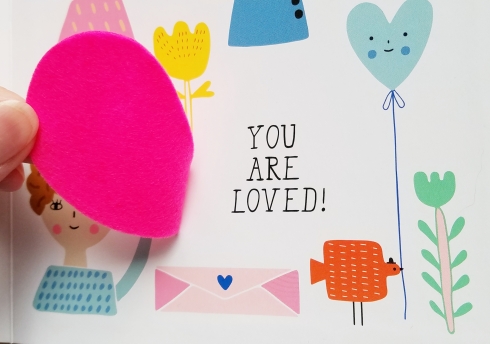 Terry, this book is sweet and adorable. Congratulations and thanks for talking about its creation!

Blog readers, you can win a copy of LOVE CAN COME IN MANY WAYS!

A random winner will be chosen soon!

With twenty-five published books, Terry Pierce has experienced the joys of being a writer in many ways. She has a B.A. degree in Early Childhood Development and an international A.M.I. teaching diploma. Terry was a pre-primary Montessori teacher for twenty-two years before deciding to follow my dream of writing for children (what she calls, “the best mid-life crisis ever!”). She’s been writing since 1999, with her work appearing in magazines and the children’s book market. She has an MFA in Writing for Children &Young Adults from Vermont College of Fine Arts, including the Picture Book Concentration certification. She also teaches online children’s writing courses for the UCLA Extension Writers’ Program. Visit her at terrypiercebooks.com.